I spent Friday to Sunday at a kayak-in site on Big Rideau Lake, having put in at the provincial park boat launch. During the wet and cold months leading up to this I viewed lots of videos and read many posts about how best to do this. We already have most camping necessities, but geared to trailer camping. Over the spring I researched and acquired (as cheaply as possible) a new mini-stove, camp cookware, a warm weather sleeping bag, underpad, tarps, dry bags, water purification, and various other odds and ends (Amazon, Trailhead-Paddleshack, Canadian Tire). I test packed to make sure everything fit and was balanced – the main criteria was my hatch openings are 8″ diameter, pretty much everything had to fit in there. It sure seemed like alot of stuff to take along, I even took pictures and made diagrams so I would know where everything went. It was also going to be my first attempt at over-nighting in a hammock. I had not had much luck with that at home on the deck, as I ended up inside every time I tried it (should have paid more attention to that red flag) 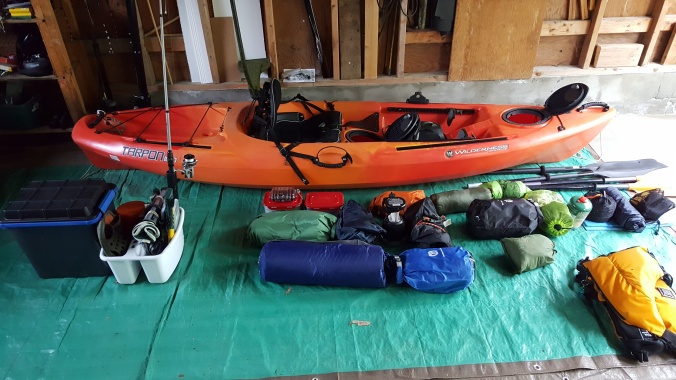 I had taken Friday off as I had other things to attend to in the morning, but was ready to head out by 1 PM. Arrived at the park, checked in and started packing the kayak. Everything went in pretty much as planned. It was tight and I had to open up some of the dry bags to stuff them in the hatches, then rolled them closed once they were in. It was a beautiful afternoon and soon I was off! The site was not far, the lake was calm, and I was feeling great.

Since I had already checked out the site on a previous visit, I knew where I was going to hang the hammock, and setup went as planned. The little bit of knot study I had done was a big help, especially this video I found, 4 knots to set up a tarp .

I put up a tarp over the hammock but as the forecast was good I didn’t even hang my second one. The only wildlife I was concerned about was raccoons, so I hung my food bag on a nearby branch not quite according to “protocol“, but I figured it was safe enough.

Campsite view from the lake 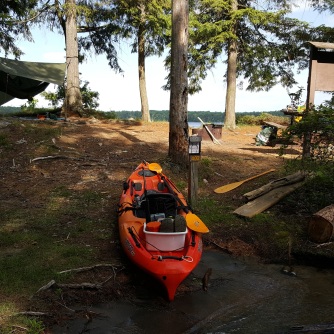 Supper was sausages over the fire and a package of Sidekicks pasta. I had brought 2 beers with me so I enjoyed a Sidelaunch with supper. Water was all lake water, filtered though my new Sawyer Mini. It seemed to work great, the water tasted great and absolutely no ill effects. 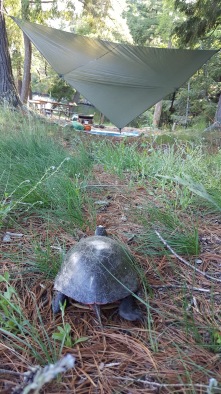 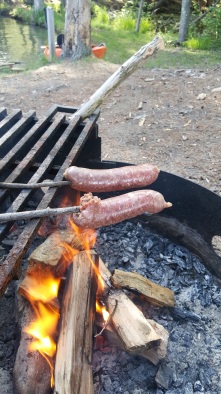 Sausage on a stick 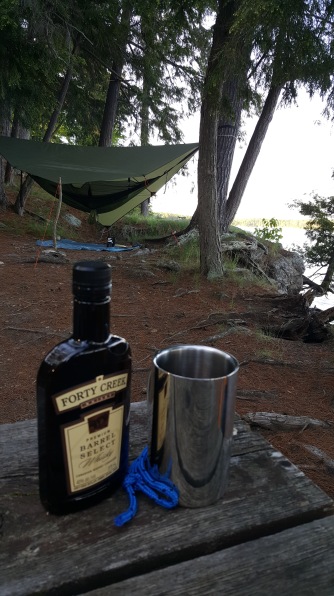 I had figured out that I had to put my Thermarest sleeping pad inside my sleeping bag so it would not move around, and hoped to have a good nights sleep. That did not happen. I was up most of the night trying to get comfortable and probably slept 2 hours – not good (it was also a huge full moon – looked like someone had left the lights on all night!). By Saturday morning I had made my mind up to head into Perth and pick up the cheapest tent I could find at Canadian Tire. On a surprising good note, the sun had me up around 5 AM and I was treated to a beautiful sunrise. 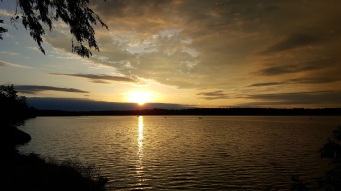 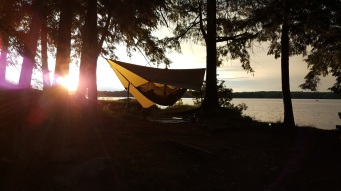 Once I had breakfast, I paddled into the boat launch, drove to Perth, got the tent, and headed back. I knew before hand that it was going to be a small tent – I ended up lying in it on a diagonal so that the pad and sleeping bag would fit. That said, it was easy to put up by myself, fit right under the tarp I already had up, and I had a nice test snooze. I was able to sleep on my side and my stomach very comfortably. 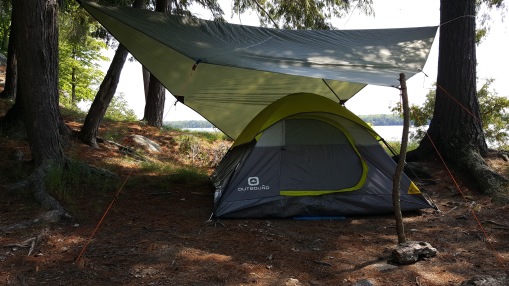 That afternoon the wind picked up to the point that it would not have been fun to kayak around, so I snoozed in the now relocated hammock and just totally relaxed. Great way to spend an afternoon. 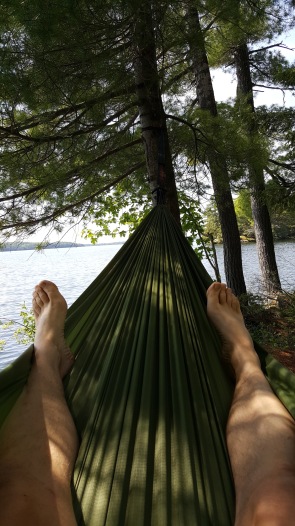 Supper was Mountain House freeze dried beef and vegetables. Um, not so good, but a hot meal none the less. One of the things I enjoy most about camping with Denise in the trailer is how well we eat, so I definitely have to work on the food prep if I’m going to keep doing this.

Due to my lack of sleep, I was ready for bed by 9:30. I had a campfire going and had enjoyed a bit of 40 Creek and the tent was looking good. And…I had a great sleep. The wind stayed pretty strong all night but everything was secure. Sunday morning the wind was still pretty strong, and I saw all the other paddle-in sites pack up and leave by around 7 am to avoid the typical later-in-the-day wind pickup. I had a quick breakfast of oatmeal and started packing myself. Everything fit in well and by 9 am I was paddling back to the boat launch. The wind was at my back and the 2 foot waves didn’t bother me much.

When I got to the boat launch there were fishermen with outboards who said the wind was too strong for them to go out. I was glad I had left early. So, everything worked pretty well, and I was able to adapt to what did not. A fun weekend!